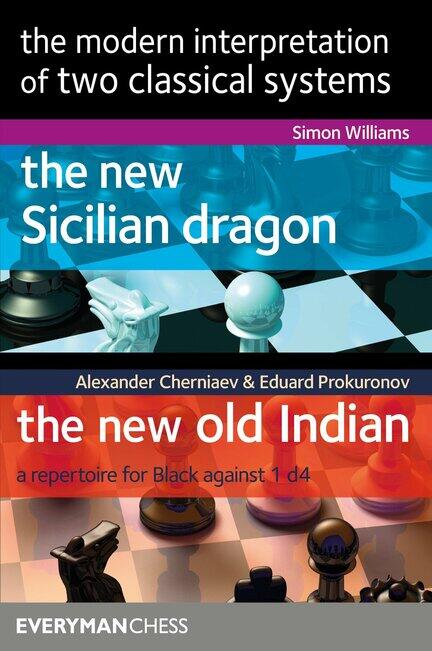 Two great books from the Everyman Chess Library, The New Old Indian by Alexander Cherniaev and Eduard Prokuronov and The New Sicilian Dragon by Simon Williams, brought together in one volume.

The Old Indian Defence is considered to be a sound way for Black to meet 1 d4. Some might argue that it is steady rather than spectacular, but is this reputation totally deserved? Grandmaster Alexander Cherniaev strongly disagrees, and in this book he introduces ambitious and aggressive ways for Black to play in the main lines. He constructs an improved version of a repertoire he has himself utilized with great success against grandmaster opposition. Using illustrative games, he studies the fundamental tactical and positional ideas for both sides, and also covers what to do if White avoids the Old Indian. This book tells you everything you need to know about playing the New Old Indian.

Grandmaster and well-known Sicilian Dragon expert Simon Williams takes a totally fresh look at this famous opening. Concentrating on his favourite Dragadorf Variation, Williams constructs a cutting-edge repertoire for Black, one which is perfect for the modern Dragon player who wishes to cause his opponents maximum problems in the opening. Drawing upon his considerable experience and using illustrative games, Williams covers the key tactical and positional ideas for both players, and highlights crucial modern day themes such as the importance of move orders.

The Sicilian Dragon is a highly popular opening, ideal for players of all levels. It enjoys such a great appeal because it leads to fascinating and fun-to-play positions in which both players regularly attack each other's kings with a complete lack of inhibition.