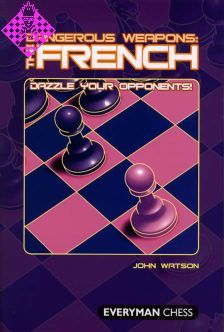 Do you need a well-deserved break from your normal chess openings? Are you tired of constantly having to keep up with modern chess theory? Or perhaps you simply wish to try out something new and exciting, but cannot decide amongst the embarrassment of choices available? Look no further for the answer!

In Dangerous Weapons: The French , International Master John Watson takes a revolutionary look at one of the most famous and widely-played chess openings: the French Defence. Instead of travelling down well-trodden and analyzed paths, Watson concentrates on fresh or little-explored variations of the French, selecting a wealth of'dangerous' options for both colours. Whether playing White or Black, a study of this book will leave you confident and fully-armed, and your opponents running for cover!

Dangerous Weapons is a brand-new series of opening books which supply the reader with an abundance of hard-hitting ideas to revitalize his or her opening repertoire. Many of the carefully chosen weapons are innovative, visually shocking,incredibly tricky, or have been unfairly discarded; they are guaranteed to throw even your most experienced opponent off balance.

The French Defence is a popular opening among players of all strengths. It is defined by 1 e4 e6; in this book we will be discussing variations that begin after the Standard continuation 1 e4 e6 2 d4 d5.

Black's second move strikes back in the centre and challenges White to make a decision with respect to his e-pawn. Depending upon the inclinations of the play­ers, the French can lead to wild tactical battles or the quietest of manoeuvring games. In most variations, White will play e5 at some point, setting up a 'pawn chain' on the central dark squares d4 and e5. This wedge serves to both grab space and prevent Black's pieces from developing actively, in particular the bishop on c8 and knight on g8. Black's task is to attack that chain of pawns and break it down, or to coordinate his pieces and pawns in such a way as to actively work around the chain.

My selections for White are dangerous weapons in the sense of aggressively attacking Black's position, with a good dose of tactical content. For Black, the French Defence is primarily a counterattacking opening that begins with measured steps, emphasizing positional strategy. Therefore most of my suggested variations for Black are not violent, but dangerous weapons in the sense of being ignored, discredited, or visually shocking, as laid out in the Preface.

I have suggested opening variations that, with two exceptions, have very little theory attached to them. As far as I can see, none of them allow your opponent an easy way to advantage, and none are unsound. I should add that the proposed lines do not overlap with those previously given in my Play the French books; indeed, I have included variations that I have misassessed or skipped over in the past.

At the end of every chapter, each variation is characterized in terms of certain attributes, using a point scale of 1 to 5. They are as follows:

In one sense, the suggested systems are all easier to play than mainstream ones because their theory is less developed. In other words, you don't need to study as much to be able to achieve a playable position, all the more so because most of your opponents will be thrown upon their own resources. Nevertheless, I think that it's useful to point out, especially to the inexperienced, the frequency with which variations can become critical from both an offensive and defensive point of view.

How sharp the variation is in terms of aggressive assaults and tactically charged situations.

Positional/Strategic Nature The extent to which the variation is characterized by manoeuvring, and concentration upon static features such as pawn structure, weaknesses, quality of the pieces, and the like.

The degree to which your position is hurt when your strategy breaks down. For example, the chance of achieving lost or very poor positions due to one bad move or a miscalculation. In this book, 3 Nc3 variations are usually riskier than 3 Nd2 variations.

The degree to which you benefit if your strategy succeeds. For example, you may come out with a material advantage or even win the game outright. Usually this correlates to risk.

The amount of theory associated with the opening, and especially theory that is outside what only a few specialists know. Of course, any new theory presented in this book doesn't count. Since none of the lines in this book are extremely theo­retical, the scale is relative. For example, the Guimard Variation of the Tarrasch and 6 Be3 in the MacCutcheon receive the highest rankings (5) in spite of being played in only about 7% of Tarrasch Variations and 10% of MacCutcheon Varia­tions respectively.

I didn't add a Fun Factor, but I've tried to find variations that are entertaining as well as effective. As you bamboozle your opponents, remember to enjoy yourself!