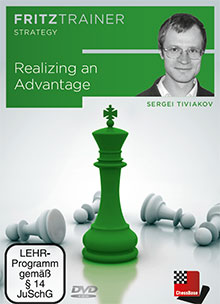 It's a problem every player encounters when he stands better in agame: how to convert his plus into a full point? In this DVD the author answers this difficult question of chess strategy, considering both the psychological aspects of the realisation of an advantage and the technical methods. The following issues are taken into account and carefully explained: selecting the correct plan, importance of the centre and space advantage, domination, the principle of two weaknesses, changing the pawn structure, converting one type of the advantage into another, king activity in the endgame and middlegame. Special attention is paid to the problem of piece exchange as part of the realisation of an advantage. This DVD is based on the games and positions from the practice of the world champions, strong grandmasters and of course the author himself. The quiz part of the disk contains 10 positions where you can test your freshly acquired knowledge on the subject. Recommended for players of all levels and ages.

Born 1973 in Krasnodar (Soviet Union), Sergei Tiviakov was a member of the Smyslov school and gained the titles of World Youth Champion at U16 and U18 levels. 1994 he represented Russia in the Chess Olympiads. Since 1997 Tiviakov has been living in Groningen (Netherlands). With his new home country he won the title in the European Teams Championships in both 2001 and 2005 and was victorious in the championship of the Netherlands in 2006 and 2007. Tiviakov celebrated his biggest success in 2008 when he won the European Individual Chess Championship.