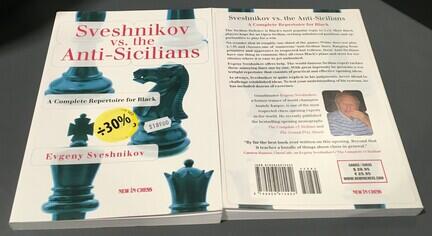 Sveshnikov, Evgeny: Sveshnikov vs the Anti-Sicilian

The Sicilian Defence is Black’s most popular reply to 1.e4. Most black players hope to get an Open Sicilian because of its unbalanced play and interesting opportunities to play for a win.But what if White avoids the Open Sicilian and does not play 2.Nf3? This happens more often than you would think, as in roughly one third of the cases White players opt for one of the numerous ‘Anti-Sicilian’ lines at their disposal.These Anti-Sicilians vary from primitive and obscure to wild and aggressive to respected but tedious. But they have one thing in common: they are all dragging Black into territory where he doesn’t want to be, and where it is easy to get ambushed.Evgeny Sveshnikov offers help. The Russian grandmaster, who is one of the most respected chess opening experts in the world, presents practical and effective recipes against a broad range of annoying variations: 2.a3?, 2.Na3?!, 2.b4?!, 2.b3, 2.Nc3, 2.d3 and many others. Black players will learn how to fight back and throw a spanner in the works when White tries to spoil their game.