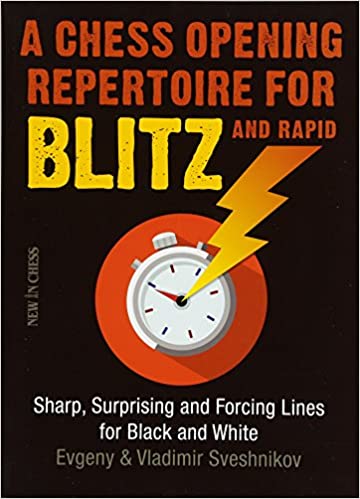 Playing blitz is one of the great joys in every chess player's life. In modern times, faster time controls have become more important than ever. Every day, innumerable numbers of rated blitz and rapid games are being played in online and over-the-board competitions and championships.In blitz, even more than in ‘classical chess', it is important to make the right decisions quickly and almost instinctively. That is why world-famous opening expert Grandmaster Evgeny Sveshnikov and his son, International Master Vladimir Sveshnikov, have created a chess opening repertoire for club players that is forcing, both narrow and deep, and aggressive.The aim is to be in control as much as possible. You want to be the one who decides which opening is going to be played, you want to dictate the technical and strategic choices. And you want to keep the pressure, increasing your opponent's chances to stumble.In designing their repertoire, father and son Sveshnikov have made a crucial choice: they do not want you to end up in positions where finding the theoretically best move is all-important, but in positions where it is relatively easy to keep finding the moves with the greatest practical effect and use.If you play the lines the Sveshnikovs have selected, your results will improve. You may even end up playing their variations in ‘slow chess' as well.