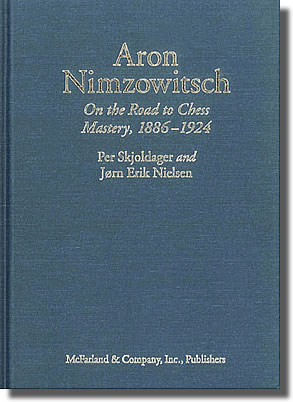 Hardback udgave.
One of the greatest chess legends of all time, Aron Nimzowitsch (1886-1935), is best known for founding the Hypermodernism school of chess, which emerged after World War I to challenge the chess ideologies of traditional central European masters. This first full-scale biography of Nimzowitsch chronicles his early life in Denmark, his family and education, and his fascination with the game that would become the focus of his life.

Also included are explorations of his tournament games and records, his dispute with influential chess teacher Siegbert Tarrasch, and his role in the development of Hypermodern Chess. With detailed accounts of nearly 450 games and the only narrative of Nimzowitsch from 1914 to 1924, a period formerly cloaked in mystery, this volume offers the most thorough profile available of one of chess’s greatest innovators.