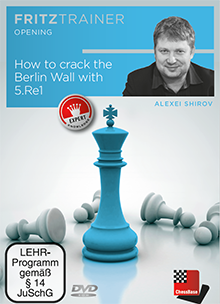 Shirov: How to crack the Berlin Wall with 5.Re1 (DVD)

The Berlin Defence which arises after 1.e4 e5 2.Nf3 Nc6 3.Bb5 Nf6 4.O-O Nxe4 gives White a hard nut to crack, and the solidity of the line led to its nickname “Berlin Wall”. The mainline 5.d4 in particular leads to positions in which White has had trouble to prove any advantage. On this DVD Latvian top player Alexei Shirov proposes a different approach. He recommends to play 5.Re1 which leads to a symmetrical position that according to Shirov is not boring at all. With a whole range of grandmaster games Shirov shows that White can indeed develop pressure and seize the initiative and that the position is full of subtleties. Other players also noted the move 5.Re1 as an option against the Berlin and it is no coincidence that this line was played in the World Championship match between Magnus Carlsen and Sergey Karjakin in New York 2016. On this DVD you get an insight how top grandmasters and chess professionals do opening research and how theory continually develops in modern tournament chess. Of course you also get a first-class weapon against the Berlin which helps you to be at least one step ahead of your opponent. Suitable for advanced club and tournament players.

and Internet connection for program activation