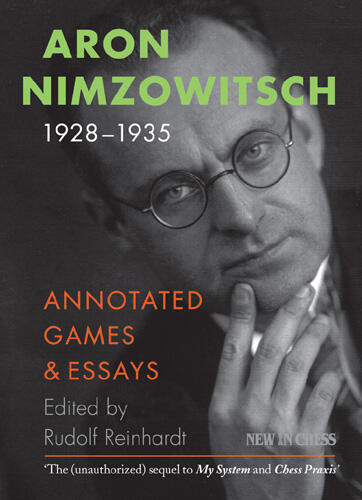 Aron Nimzowitsch (1886 – 1935) was the most influential chess thinker of the 20th century. His books ‘My System’ (1925) and ‘Chess Praxis’ (1928) had tremendous impact and continue to be printed, sold and read to this day. Every chess player who is serious about improving his game, studies the lessons of this great Russian-born innovator.
During several decades of research German chess historian Rudolf Reinhardt compiled, from an immense variety of sources, all the games Nimzowitsch played after 1928. They are presented with notes by Nimzowitsch himself and, in some cases, by his contemporaries. In addition to the games Reinhardt also collected the articles and essays that Nimzowitsch wrote during the last seven years of his life.

Reinhardt’s collection offers a unique view of the chess world of the late 1920s and 1930s, its top tournaments and the state of theory. More importantly, it portrays Nimzowitsch the chess player and author in the last seven years of his short life. It is all there: the fights, the competitors and the polemics, all in the incomparable style of the master: pointed, elegant, precise and highly original.
The book starts where Nimzowitsch’s second volume Chess Praxis ends. Richard Reinhardt, who died unexpectedly when writing the preface to his monumental collection, did not exaggerate when he called it the unauthorized sequel to the classics Nimzowitsch himself published during his lifetime.