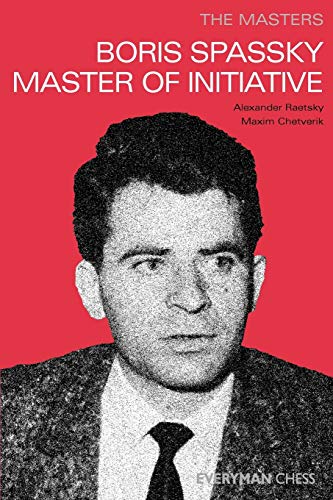 Boris Spassky is a true chess legend, a World Champion who, thanks to his monumental battles with Bobby Fischer, raised the popularity of the game to a level that had never been seen before. Although at the height of his powers many saw Spassky as a complete and universal player, adept at outplaying his opponents in any type of position, it is no secret that from an early age he thrived on sharp, attacking play. He was a superb practical player, and with the initiative at his hands he could conjure up wonderful combinations and deadly attacks.

In Boris Spassky Master of Initiative , Alexander Raetsky and Maxim Chetverik look back over Spassky’s long and distinguished career to examine how he defeated his long-time adversaries, carefully highlighting his most colourful and celebrated encounters over the chessboard. A deep study of his style and games will entertain and inspire any true chess fan.

Alexander Raetsky is a Russian Grandmaster and an experienced competitor on the chess tournament circuit. He’s also a skilled writer and has been a frequent contributor to the famous Russian magazine 64 and the internationally renowned publication New In Chess. His many books for Everyman Chess include Meeting 1 e4 , which was very well received by critics and chess players alike.

Maxim Chetverik , also from Russia, is an International Master and a renowned openings theoretician. Earlier works for Everyman Chess include Mikhail Tal: Tactical Genius , which he also co-authored with Raetsky.