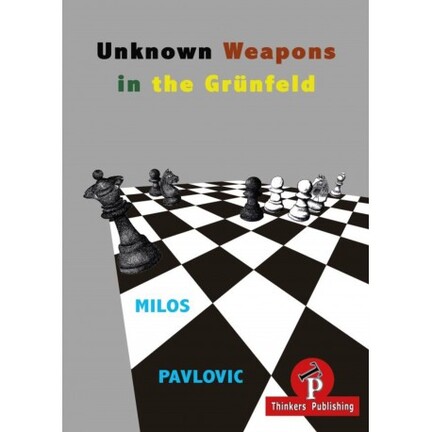 Pavlovic: Unknown Weapons In the Grünfeld

The Grünfeld Defence is one of the most dynamic openings for Black. This opening was developed by two famous World Cham-pions, namely Bobby Fischer and Garry Kasparov.

While the theory is still far from being ex-hausted and still developing our author Grandmaster Milos Pavlovic made a strong case and found new alternatives to battle White’s setups. This is his first book for Thin-kers Publishing, in a series that will surely be-come very popular among its readers.

Grandmaster Milos Pavlovic was born in Bel-grade in 1964. So far he won many chess tournaments worldwide. In 2002 he became the Yugoslav Champion. He is a well know theoretician, already the author of three wi-dely appraised books and he wrote nume-rous articles published in various Chess ma-gazines. Currently he is also writing for Chess Publishing and ChessBase.

Thinkers Publishing wishes you success on your lifelong journey of chess improvement!