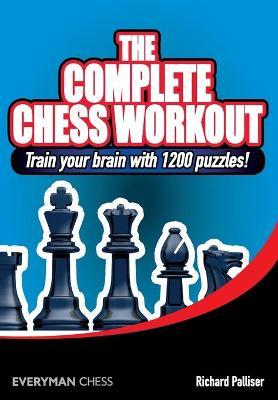 All top chess players agree that to keep your tactical muscles in shape it's imperative to continue training, and the easiest and most fun way to do this is by performing tactical exercises. Even solving a few puzzles for ten minutes each day can be of the utmost benefit for the aspiring player. But where can one find the required number of suitable puzzles to satisfy this demand?

Look no further than The Complete Chess Workout. In this book, tactics expert Richard Palliser presents the reader with a massive 1200 puzzles, all checked for accuracy by the latest computer engines. There is something for players of all levels here: a huge number of basic tactics - forks, pins, skewers and checkmates - to appeal to beginners and improvers, and several brain-teasers that will tax even the strongest of players. Palliser has meticulously collected puzzles from practical play in recent years - a large percentage of the exercises here will be completely new to most readers. All the important tactical themes are covered, while there are special sections on opening traps and endgames. Work your way through this book, and your opponents will soon be on the receiving end of your increased tactical powers!

Spending as little as 10-15 minutes a day on one's tactical ability really can reap dividends. I can certainly testify to that myself and it's always very welcome to see a pupil regularly trying to solve a number of tactical exercises: not only do they become more tactically alert, but they also improve their clock handling and gain in confidence.

During the past decade some quite challenging puzzle books have appeared, aimed chiefly at the level of the stronger club player and above. These are a most welcome devel­opment, but are perhaps not the best tactical training for less experienced players or even average club players. Some attempted solving of very tough positions is a good thing, es­pecially if the solution is then studied in some detail, but such works are unlikely to provide the budding student with a grounding in the fundamentals of tactical and attacking play.

Wanting to produce a book that would improve the tactical knowledge of the average player led me to drawing up categories of both the more common attacking motifs (bishop sacrifices on h7 and knight sacrifices on f7 being two main examples) and the less usual (such as a queen sacrifice on h6). Thus there are a number of examples of each key theme in this work which should, I hope, help to cement these important ideas into the reader's subconscious, thereby improving both their attacking and defensive ability.

One cannot, of course, blindly attack in every game: the right conditions to attack must be present, such as a chip in the opposition king's pawn wall or the ability to quickly trans­fer many of one's pieces to the attacking zone. Many of the puzzles in this work deal with attacking scenarios and should help the reader to further appreciate just when and why an attack is likely to work.

What, though, of the many games in which we don't get to attack? In these tactical play is no less likely to occur and it's important to always be alert to tactical opportunities. One very handy way of not letting these pass by is to keep in mind John Nunn's very useful mnemonic: LPDO ('loose pieces drop off). Indeed, it's very noticeable just how many tac­tics are to do with a piece being undefended or poorly defended. The reader will become fully aware of the concept of LPs while working through the large chapter on attacking motifs, but so important is the topic that I've also included a later chapter devoted to both it and the related theme of overloading a defensive piece.

To remind the reader that tactics are present throughout the game, there are also chap­ters devoted to tactics in both the opening and the endgame, while the fiendish puzzles of Chapter Six should challenge even the very tactically able. I've also aimed to make things a little trickier throughout for the reader by not following the common practice of sorting each chapter by difficulty. Instead the order is much more like the tactical opportunities that occur in our games, being random (sorting alphabetically by tournament location is about as random as one can get!) and thereby simple tactics follow quite challenging ones and vice versa. Do be aware too that by no means every combination mates in style or wins heavy material; just as in real life, many of the puzzles included here only lead to the win of a pawn, while a few even see the side to move scrambling a draw through some tactical device or other.

I couldn't resist including a few classic favourites among the 1,200 puzzles, but even those with an excellent knowledge of the classics should find the majority of the positions included new. No less than 585 of the puzzles are from games played in 2007 and I've also drawn heavily on unpublished games collections: chiefly my own I'm afraid, but I'm also very grateful to a number of people who sent or supplied games: Chris Duggan, Scott Fraser, Paul Hopwood, Neville Pearce, Kieran Smallbone, Norman Stephenson, Sean Terry (editor of the excellent Oxford City CC magazine, Dislnformator), and Tim Turner.

I hope that this work will improve the tactical eye of the reader, while also reminding them of the many beautiful possibilities thrown up by our favourite royal game.