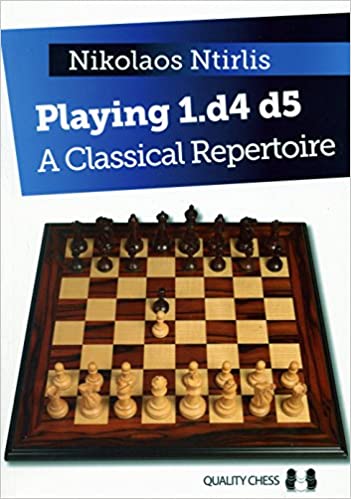 In Playing 1.d4 d5 – A Classical Repertoire, Nikolaos Ntirlis provides a top-class repertoire for Black after 1.d4 d5 with the Queen's Gambit Declined. This is truly the Rolls Royce of chess openings, having been played with both colors by most World Champions and world-class players for more than a century. As a lover of chess history, Ntirlis has distilled the best ideas from the games of legendary players such as Rubinstein, Capablanca and Alekhine, and updated them using the latest analytical tools that modern technology has to offer.

In addition to the classical QGD, Ntirlis offers a complete repertoire against the Catalan, London System, Torre and all other significant alternatives from move 2 onwards. Every chapter begins with a discussion of typical plans, pawn structures and other relevant themes. This book also includes two bonus chapters covering 1.c4 and 1.Nf3, providing a starter repertoire for QGD players against both moves.