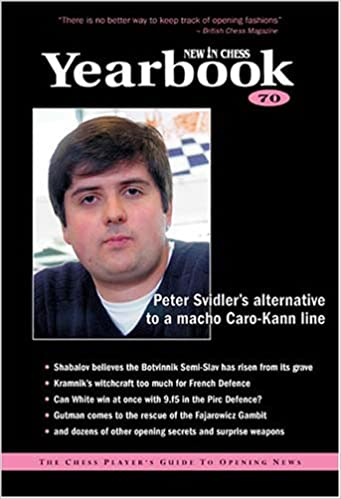 Readers from all over the world join in discussions of previous surveys. Both (grand)masters and club players shed their light on new opening developments and search together for the truth.

The game Smeets-Pavasovic from the Grandmaster C Group of the 2004 CORUS Chess Tournament brought Sosonko back to his childhood days in Leningrad. The teachers at the Pioneer Palace there would never have approved of the moves these young grandmasters were playing: g2-g4 for White and especially Bf8-d6, putting the bishop in front of the queen's pawn. Sosonko calls it Fidel's Attack. Read why!

The publication of the third edition of John Watson's classic 'Play the French' and a trilogy on the same opening by Lev Psakhis, whose books are always worth a detour, are an excellent starting point for Glenn Flear to dedicate his review column to. And Sakaev's Queen's Gambit Accepted monograph is the ideal finale. According to Flear it is an ideal practical book for those wanting to learn about this opening. Quality comes at a price!