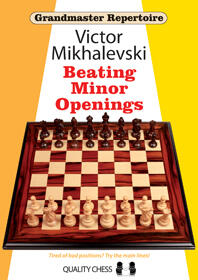 Beating Minor Openings offers a world-class repertoire for Black against every sensible first move apart from 1.d4 and 1.e4. GM Victor Mikhalevski advocates an ambitious approach for Black, with the aim of occupying the centre and fighting for an advantage, rather than mere equality, wherever possible. The most critical moves covered are 1.c4 and 1.Nf3. Against the latter, Mikhalevski supplies a range of replies to allow for transpositions to most queen’s pawn openings. In a review of Mikhalevski’s previous book for Quality Chess, IM John Cox commented: “Given the goal the book has set itself, I don’t believe the job could have been done better.”