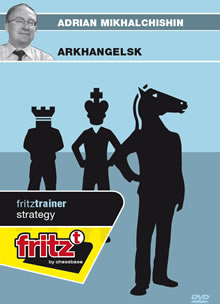 The Ruy Lopez represents one of the oldest and best openings for the first player, and everyone going for the Spanish game with Black faces the question of how he wants to tackle the white ideas. One of the more aggressive fighting methods is the move order 1.e4 e5 2.Nf3 Nc6 3.Bb5 a6 4.Ba4 Nf6 5.0-0 b5 6.Bb3 Bb7, which was developed in the early sixties by players from the north Russian town of Archangelsk and has carried this name ever since. Later, the variation was intensively analysed by players from Lvov - among them Mikhalchishin and Beliavsky - and applied in tournament practice. In the second half of the seventies it gained great popularity for the first time. In the Archangelsk Variation, Black defines the position of this queen'sbishop early on with 6. ... Bb7 in order to exert pressure against the opponent's centre, in particular the point e4. White must decide whether he protects this pawn solidly with 7.d3 or goes for the unfathomable complications after 7.c3 Nxe4. Another option is 7.Re1 Bc5 8.c3 d6 9.d4 Bb6, which is closely related to the Moller System. The experienced trainer and Grandmaster Adrian Mikhalchishin is an outstanding connoisseur of these variations, the ideas of which he goes on to explain in nearly five hours video playing time. Adrian Mikhalchishin, a Grandmaster since1978, is currently among the top 5 world trainers and FIDE Trainers Committee Vice-Chairman. He trained the team of USSR in 1980's ,national teams of Slovenia, Poland and Netherlands, and was the trainer of Anatoly Karpov (1980-1986), trained Zsuzsa Polgar, Alexander Beliavsky,Maja Chiburdanidse,Arkadij Naidich and Vasily Ivanchuk.