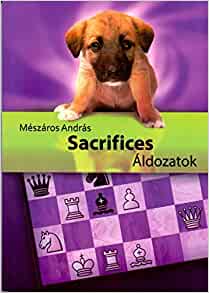 The main purpose of this book is to make beginning and advanced chess players acquainted with the colourful world of chess tactics. To this end, the reader can make familiar with several hundreds of tactical sacrifices.

Computer science and internet have brought important changes in the field of chess. Chess is already played by many millions both competitively and as a hobby. Without basic tactical knowledge now it can hardly be played successfully. Even small children have some degree of tactical knowledge.

This leaflet is aimed at making players familiar with tactical sacrifices in an entertaining manner. Examples were derived from training samples and practical chess games. Sacrificing requires accurate foresight and calculation. In the course of studying the examples the reader will get more and more experienced in the wide-ranging world of tactical sacrifices.

Sacrifice is such a continuation in a chess game when a piece of greater value is given in return for “nothing” or a piece of minor value. When the operation is completed, the position of the sacrificing side is left with a positive change of a lesser or greater size, such as:

“The main purpose of a sacrifice is to effectively increase the strength of the pieces.&rdquo

In the foregoing examples we have already often seen any of the sacrifices. In combinations, contrary to tactical basics shown so far, often several tactical motifs play a part at the same time. Therefore it is worth classifying the sacrifices according to their types.

The sorts of sacrifices: