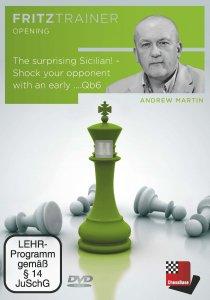 In the modern game, a player has to be ready to play almost any opening variation at short notice. The plan is to interrupt the preparation of the opponent at every turn. A knowledge of dynamic and slightly unusual lines could well score many,many points for the resourceful player. The Kveinys Variation : 1 e4 c5 2 Nf3 e6 3 d4 cxd4 4 Nxd4 Qb6! is surprisingly little-played, yet gives Black excellent chances and on this new ChessBase DVD, Andrew Martin explains how the system works. For the Master, we have a surprise weapon which players of the calibre of Svidler, Judit Polgar and Kveinys have used to defeat tough opposition. For the club player, where preparation is sketchy, we have a line which asks questions of the opponent right at the beginning of the game and creates immediate pressure on White to find good moves. That is the way to win! Perhaps the Kveinys variation will become more popular in the future. It does not deserve to be a comparatively rare sideline.

Andrew Martin is an English chess player with the title of International Master. He has won various national and international tournaments and was a commentator on the chess world championship between Kasparov and Kramnik in 2000. He is known as a professional chess teacher and head trainer of the English youth team. He is a chess columnist, an author of chess books and the author of various instructional videos. He was the publisher of the series Trends Publications. Andrew Martin has recorded extensively for Chessbase since 2004.