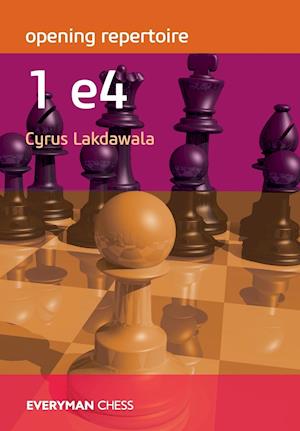 In this book, prolific chess author Cyrus Lakdawala recommends a repertoire for White players who like to open 1 e4. The repertoire is based around two main themes:

1. The suggested variations for White are ones that rely far more on a generic understanding of strategic ideas rather than the memorisation of reams of opening theory. This explains the choice of the Bishop’s Opening (handled “Lopez-style”) against 1...e5 and the Bb5 variations against the Sicilian Defence. Both these lines are designed to create dynamic and interesting middlegame positions rather than attempting to score a quick knockout victory – a generally overambitious aim that often backfires

2. The variations are chosen so that White can gain space whenever possible. Therefore the Advance Variation is recommended against the French Defence (1 e4 e6 2 d4 d5 3 e5) and also the Caro-Kann Defence (1 e4 c6 2 d4 d5 3 e5). The fact that these lines often create similar middlegame structures is helpful for general comprehension of White’s plans.

If you want to develop your repertoire with 1 e4 then this is the book for you.