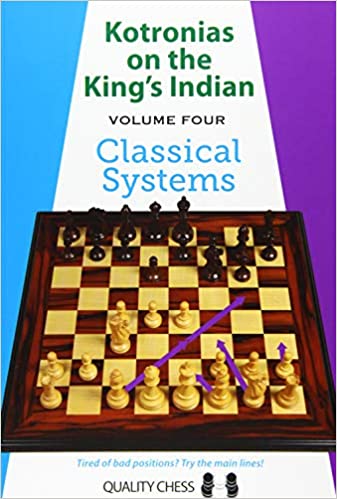 The King's Indian Defense is one of Black's most dynamic responses to 1.d4. A favoriteweapon of both Fischer and Kasparov, it remains a popular choice at all levelsof play. In this, the fourth volume of the epic Kotronias on the King's Indianseries, Grandmaster Vassilios Kotronias tackles a varietyof White's attempts to challenge his favorite opening, starting with thesequence 1.d4 Nf6 2.c4 g6 3.Nc3 Bg74.e4 d6.

Throughout the work, the author shares his considerable knowledge oftypical positional motifs, whileproviding plenty of ammunition should the game erupt into the full-bloodedwarfare that is the hallmark of the King's Indian. A special selectionof test positions is provided, enabling the reader to sharpen his tacticalskills and improve his middlegame understanding.