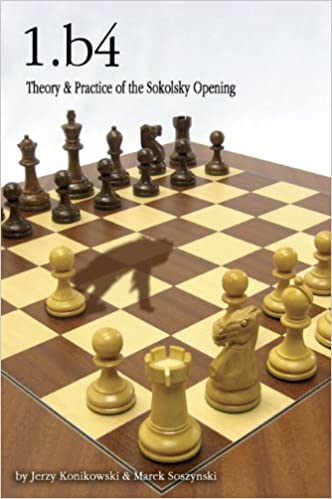 Konikowski, Jerzy: 1. b4: Theory and Practice of the Sokolsky Opening (PB)

Weird and wacky or safe and sound? The Sokolsky Opening is both. Sometimes the play is truly deviant both sides initial few moves all on the a-b-c files and the first pieces exchanged a pair of rooks at other times 1.b4 becomes merely a roundabout route to a respectable English, Reti, King s Indian or reversed French position. This book, packed with fresh analysis and 95 illustrative games, clearly shows that White can look forward to a rewarding albeit complex or unusual struggle. There s no need to dwell on the usual platitudes applied interchangeably to unorthodox openings, like a good psychological choice to get your opponent into unfamiliar territory. The Sokolsky, otherwise known as the Orangutan or the Polish Attack, is an independent opening whose merits are due to chess analysis not psychoanalysis. 1.b4 is sound, the refutations don t work, assessments are disputed, printed theory till now has been inadequate, White s aims are clear, and the practitioners have been world class. So what are you waiting for? Get out there and hit your opponents with the b-pawn!