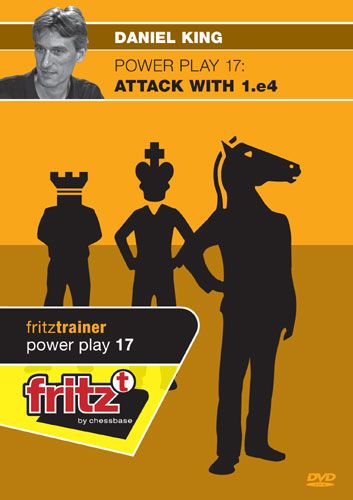 This DVD provides you with a repertoire of attacking lines against the four major defences to 1.e4 - that is, 1...e5, the Sicilian, the French, and the Caro Kann. These systems will put your opponent under pressure, and when players are under pressure, mistakes occur.

This is a practical repertoire - if we study openings we want to be sure to use them in our games. For example 1 e4 e5 2 Nf3 Nc6 3 Bc4 is one of the recommendations. After just a few moves, you will be dictating play.

Grandmaster Daniel King has been a professional chess player for more than 20 years. During that time he has represented his country on many occasions, including an historic match victory over the Soviet Union in Reykjavik, 1990. At the same time he has distinguished himself as a coach, helping many of England's younger generation to achieve their potential. Besides his chess career, he has built up a reputation as a commentator on television, radio and the internet. He is also an award-winning author of more than 15 books.

'The PowerPlay DVD series by GM Daniel King is one of the most successful chess instruction tools today.' - New In Chess (Shop)