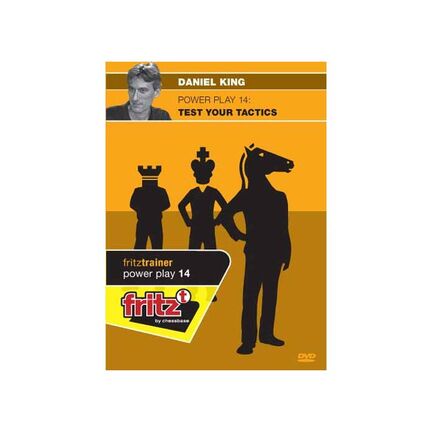 On this DVD Grandmaster Daniel King:

But this is a test with a difference. Although the emphasis is on tactics, there are also positions that require a strategic solution. You don't know what's coming next... When we are discussing tactics, the concept of pattern recognition is very important. Almost every chess game is different, but there are familiar tactical themes that recur over and over. Being able to spot these motifs rapidly is essential to chess mastery. This DVD is a good starting point! The Power Play series is suitable for anyone looking to improve their chess, but also provides ready-made lessons and exercises for a trainer.

Grandmaster Daniel King has been a professional chess player for more than 20 years. During that time he has represented his country on many occasions, including an historic match victory over the Soviet Union in Reykjavik, 1990. At the same time he has distinguished himself as a coach, helping many of England's younger generation to achieve their potential. Besides his chess career, he has built up a reputation as a commentator on television, radio and the internet. He is also an award-winning author of more than 15 books.

'The PowerPlay DVD series by GM Daniel King is one of the most successful chess instruction tools today.' - New In Chess (Shop)