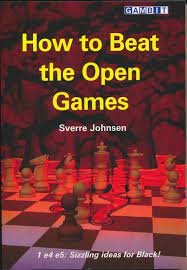 Johnsen, Sverre: How to Beat the Open Games

The Open Games (those beginning 1 e4 e5) are now more topical than ever, featuring in a high proportion of elite-level games. This new user-friendly guide offers players of all levels a carefully worked-out repertoire, taking into account this wealth of new material.

Noted opening writer Sverre Johnsen has also taken a critical look at the more traditional Open Games, where theory is often based on old or obscure games. Making extensive use of modern computer engines, he has overturned ancient assessments and found new paths that breathe fresh life into positions long thought to be resolved. It is striking how often in his lines Black is able to seize the initiative.

Johnsen has chosen sound lines that are likely to surprise opponents and deny them the type of game they are seeking. He has deeply researched correspondence sources and recent books on the Open Games, and employs similar methods to those that made his earlier opening works so popular among club-level players.

Sverre Johnsen is a chess analyst, researcher, organizer, trainer and writer from Norway. He is co-author of Win with the London System and Win with the Stonewall Dutch , two of the best-selling openings books of recent years.