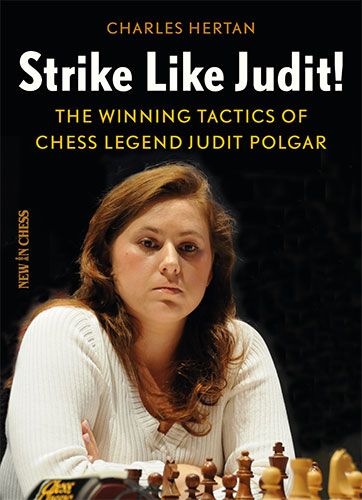 Judit Polgar is the strongest female chess player of all time. From an early age on the Hungarian prodigy baffled the world with her sensational triumphs. At the age of 15 she beat Bobby Fischer’s record to become the youngest grandmaster in history. During her glorious career, which she ended in 2014, she defeated World Champions Boris Spassky, Anatoly Karpov, Garry Kasparov, Vishy Anand and Magnus Carlsen.
To reach the 8th spot in the FIDE World Rankings (for men) and belong to the very best for many years, as Judit Polgar did, you obviously have to be a brilliant all-round chess player. Still, she will be first and foremost remembered for her attacking skills. Her electrifying combinations and tactical triumphs set her apart. As former U.S. Champion Joel Benjamin said after he lost to her: "She is a tiger at the chessboard. She absolutely has a killer instinct." Award-winning author Charles Hertan has revisited the gold mine of Judit Polgar’s games and selected her best and most instructive tactics. They are arranged by theme and presented with helpful explanations and lots of practical advice. You will be inspired by her clever traps, stunning sacrifices and cunning endgame tricks. You will learn from her tactical vision, calculating skills and counter-intuitive ideas. Strike Like Judit is a riveting guide that will help you win more games as you will find killer moves more easily and more quickly. Charles Hertan is a FIDE Master from Massachusetts who has been teaching chess for more than thirty years. He won the ChessCafe Book of the Year Award and authored the best-selling 'Power Chess for Kids' books.