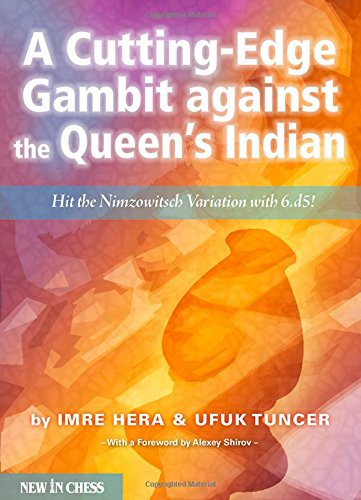 Hera, Imre m.fl: A Cutting-Edge Gambit against the Queen's Indian

Hit the Nimzowitsch Variation with 6.d5!

The ultra-sharp pawn sacrifice 6.d5 has caused a revolution in the 4 ... Ba6 line of the Queen's Indian Defence in recent years. The ingenious gambit was hotly debated at the highest level by players like Alexey Shirov, for White, and Peter Leko, for Black. At club level it became a dangerous weapon for attackers. Hungarian grandmaster Imre Hera and Turkish FIDE master Ufuk Tuncer have charted this topicalline and analysed it deeply.They give a clear overview ofthe history ofthe line and have thoroughly investigated all Black's answers in separate parts and chapters. The deep and often spectacular variations are illuminated by instructive and entertaining prose.

A Cutting-Edge Gambit against the Queen's Indian aims to provide a repertoire for the white player, but anyone who plays the line with black is also well advised to study this work carefully! It presents countless brilliant resources and eye-catching novelties.

Imre Hera became a chess grandmaster in 2007 and has won many tournaments in classical and rapid play. He is a successful player in team championships throughout Europe. Ufuk Tuncer is aTurkish FIDE master who lives in Germany. He is an active player and a well-known opening theoretician who has written highly topical Surveys for New In ChessYearbooks.