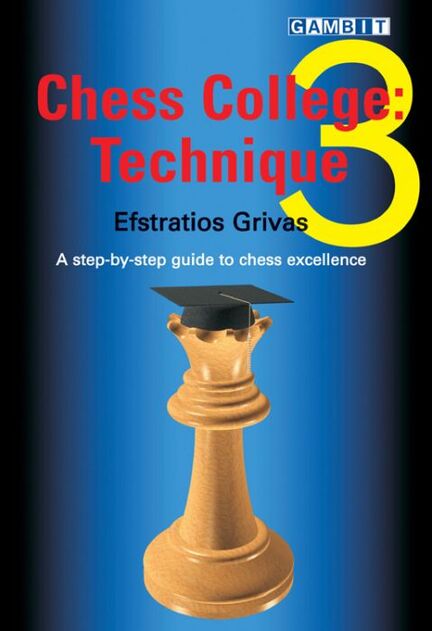 Chess College is a series of books that will take intermediate players to new levels of chess understanding. Efstratios 1 Grivas, a grandmaster and highly experienced chess trainer, provides a wealth of instruction on many aspects of chess middlegames. The emphasis is on practical understanding: whenever he introduces a new idea, Grivas immediately illustrates it with a number of entertaining and instructive examples. Many of these games are fresh examples drawn from his own practice, which has the great benefit that he can explain with authority what was going on over the board.

Volume 3: Technique features many training tips and discusses important topics such as:

Every chess-player who wishes to improve his level in the difficult subject of chess is obliged, first of all, to study methodically and understand the existing principles that govern the theory of the opening, middlegame and endgame.

Most chess-players focus more on the study of opening theory than other aspects of the game. The reasons are probably clear: opening theory is easier to learn and can provide immediate results, although this is based more on the opponent's ignorance than our own abilities. Even for a chess trainer, it is easier to teach some variations from this or that opening or a set of simple tactical motifs than to engross himself in the exposition of middlegame and endgame theory.

Yes, middlegame and endgame theory does exist. The great difficulty in approaching it lies in the fact that it does not follow absolute and clear-cut paths, but rather involves deep research in the ideas and logic by which specific types of positions are treated. Moreover, unlike opening theory, the theory of the middlegame and the endgame does not change rapidly based on modern developments and remains almost intact through the years.

In view of the above, any chess-player who wishes to follow a chess career or simply become a better player must refrain from the commonplace and assume a different approach. He must develop a good understanding of middlegame and endgame theory, so as to be able in his games to proceed in a proper way after his chosen opening has reached its conclusion. The chess-player can differentiate himself only in the opening; there, each one of us brings forth his own beliefs and convictions, and in general his own experiences and preferences. Objectively, no opening loses - but also no opening wins. The opening is just the beginning of the journey and serves to offer us a comfortable start. But to reach the end of this journey successfully we have to count on our knowledge and experience, as regards middlegame and endgame theory.

Endgame theory teaches us two fundamental issues. First, how to extract the maximum from a basic theoretical position with little material, where the experts (and practice comprising thousands of games) have reached definite conclusions. Second, the way in which we can handle an endgame, depending on the material remaining on the board, and the ideas and plans we should employ. This second issue is significantly more difficult to master because, apart from making full use of the first one (we must be aware of the possible outcomes of the endgame in question) it is greatly influenced by our experience and understanding, which are basically derived from the images and impressions we have from related positions. And, of course, a primary role is played by the effort we have in-vested in studying.

In middlegame theory, things are even tougher. We are obliged to study various types of posi­tions with specific strategic and tactical attributes, so as to understand the underlying ideas and be able to employ them ourselves in similar situations. Besides, while many chess-players have studied these topics and acquired knowledge, it is the application of this knowledge in practice that helps differentiate between them. True, chess is not a simple activity, but it becomes so much more attractive when we acquire this knowledge...

This is the last of three books that deal with middlegame and general chess theory. The purpose of this series is to introduce the reader to advanced training concepts, using the same methods of presentation and instruction that were taught to me personally by famous trainers that I have worked with. I owe to these people gratitude for their valuable contribution to my progress as a chess-player. Besides, the fact that I succeeded in attaining the grandmaster title is owed first and foremost to the education I received and then to my personal work and effort.

In this final volume we continue our wide-ranging discussion of chess middlegame theory. We focus in particular on certain areas in which knowledge of specific methods, procedures and sequences are especially important, and so can to a degree be considered technical in nature. We also examine the practical problems when handling positions where one side or the other holds a large or decisive advantage. However, as in the two previous volumes, each chapter touches upon many topics, including ones highlighted in other chapters and in other parts of this series. And we begin the discussion by considering some of the factors that can cause players to fail to make the most of their chances and their potential and how these problems can be remedied.