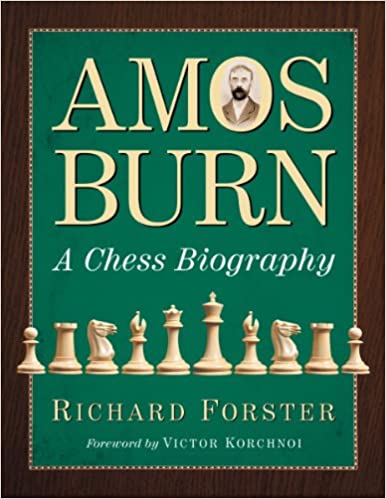 This enormous and definitive work on the Englishman Amos Burn assembles and analyzes all extant games and provides a thorough biography of the famous chess master of the 19th and early 20th centuries. It chronicles in exceptional detail the broader picture of chess development throughout that era.
Burn was active for a long time, winning victories over such masters as Blackburne, Marshall, Steinitz (his mentor), Alekhine, and Zukertort. He was a fighting player who relished tactical battles against his more romantic rivals but was also one of the world’s best defensive players. He made a number of valuable discoveries in such openings as the Queen’s Gambit Declined and the Ruy Lopez, and even today his name remains associated with a variation of the French Defense.

Burn’s life is painstakingly traced from his birth on the last day of 1848 to his death of a stroke at age 76. The great international tournaments in which he took part are paid particular attention, with extensive quotation of notes by Burn himself and his contemporaries. Where necessary, old analysis is corrected and supplemented. Meticulous research has been undertaken in newspapers and periodicals from various countries where Burn played and traveled, including the United States, with the result that many forgotten games have been unearthed. Precise citations of primary sources are given in all cases.