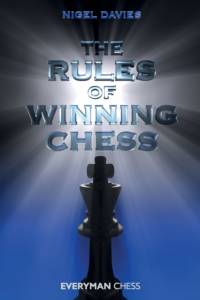 Davies: The Rules of Winning Chess

We all know those 'lucky' players who just seem to be naturally gifted at chess. They always recognize the best squares for their pieces, they instinctively know whether to seize the initiative or to play quietly, and they are ruthless in exploiting opponents' weaknesses while minimizing the effect of their own. What's more, they are always well prepared and possess bundles of energy. In short, they make chess look easy.

How do they do it?

Do they know something the rest of us don't?

Yes, they do - they know the rules of winning chess.

These are the fundamentals - easy-to-learn guidelines which will help you to achieve greater understanding in your chess and enable you to approach every game with confidence.

The Rules of Winning Chess will show you the way.

Introduction Writing this book presented me with a challenge; the more that someone under­stands about chess the less important rules seem to be. Then I realized this is only because our ideas about chess become so deeply ingrained that we no longer need to voice them. They are still there but dwell in the subconscious mind.

So this project presented me with a unique opportunity: to give form to the many beliefs I have built up through some 40 years of playing and studying chess about how a chess game should be conducted. It also presented the challenge of stating them in a clear and concise way.

The list of rules that has emerged is a rather personal one and I am sure that many other players will disagree with both my views and priorities. I can only say that a player's guidelines cannot be decided by committee. My hope is that the reader will find some points of interest that may ultimately become incorporated into his or her own chess persona. I offer my rules to inspire rather than instruct, to stimulate thought and disagreement rather than blind obedience.

I have divided my rules into five different categories: the player, preparation, the opening, the middlegame and the endgame. To some extent this division is artificial, not least because the boundaries between these areas are often blurred. I hope that it will at least lend clarity to my presentation.

The reader may also be surprised at some of my sources, in that many of them are not specifically concerned with chess. To a large extent this reflects the univer­sal nature of the chess struggle in that rules which apply to the player, board and pieces are analogous to those in other spheres.

I would like to express my appreciation to the many people who have acted as my mentors and teachers over the years and the many who continue to do so in my pursuit of lifelong learning. Special mention should go to the former British Veterans Champion Samuel Roberts, FIDE Master John Littlewood, Grandmaster and former Soviet Chess Champion Lev Psakhis, former World squash champion and speculator Victor Niederhoffer, Master Lam Kam-Chuen and Sifu Steven Wil­liams. Most of all there is my son Sam whose curiosity about the world is a con­stant source of inspiration.