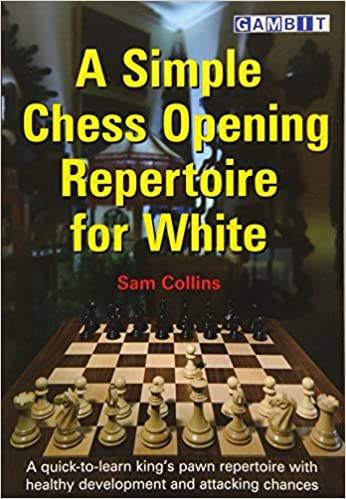 By carefully choosing variations that lead to similar structures, IM Sam Collins has put together a powerful repertoire book ideal for players with limited study time. White opens with 1 e4 and develops his pieces to natural squares, seeking open lines and the initiative. The dominant theme of this sound and active repertoire is that – where reasonable – White seeks out Isolated Queen Pawn (IQP) positions: i.e. with the c3 Sicilian, Panov Caro-Kann, Tarrasch French, and the Italian Game with early c3 and d4.There are no speculative gambits here, just plenty of healthy aggression and new ideas. Because so many of Collins’s recommendations lead to familiar structures, ideas can easily be transplanted from one opening to another. He gives illustrative games that emphasize the key themes, including White’s many opportunities to forcibly weaken and attack the black king. The specific analysis is up-to-the-minute and features ideas that have proven their worth in grandmaster practice. Throughout there is attention to move-order subtleties, with clever nuances in ‘sidelines’ that your opponents are unlikely to have examined in detail.Irish international master Sam Collins won the championship of his home country in 2002 and 2014. He has represented Ireland in numerous Olympiads, winning an individual gold medal at Bled in 2002. He is also an experienced chess teacher who has lectured at the Berkeley Chess School in California. His previous books for Gambit were Chess Explained: The c3 Sicilian and the highly successful general opening work Understanding the Chess Openings.