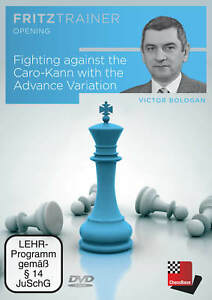 Bologan, Victor: Fighting against the Caro-Kann

The Caro-Kann Defence is one of the most solid replies for Black after 1.e4. I’ve played it myself for many years with black, so I know how difficult is to gain an advantage with white. My choice of the Advance Variation for White is because of the complex strategical play in which White has a long-term space advantage. If he also understands the ideas of this opening well, then White will be able to keep up the pressure. The fact that such players as Gashimov, Karjakin, Caruana, Anand, Svidler, Grischuk and Shirov often play the Advance Variation against the Caro-Kann will give you the much needed chess confidence, while watching their games will inspire you to great creative and performance achievements.

The DVD is made for a large audience, starting with beginners up to higher level players. It is carefully structured, which will help you to find your way around the masses of new theory, and to remember just what you need to know before the game. One famous grandmaster confessed me that he studied most of my DVDs, and that he is also using them for his students. Full steam ahead against the Caro-Kann!

Victor Bologan is a pupil of the top Moldovan trainer Vecheslav Chebanenko. For many years Bologan has been the number one in Moldova and has represented his country in ten Chess Olympiads. He has won over 50 international events. His greatest successes were in 2003, when he first won the Aeroflot Open and then the famous Dortmund Tournament, ahead of Kramnik and Anand. Bologan has extensive experience as a trainer and has also published five chess books and 19 ChessBase DVDs.