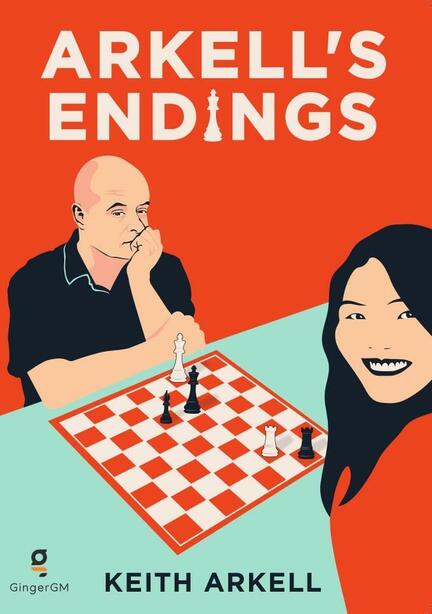 With chess booming online and time controls becoming ever faster, mastery of the endgame has never been so important. A few positions can be memorised; most rely on feel. How would you go about converting an extra pawn in a rook endgame and would you have any idea how to even try to win bishop and knight against knight and pawn?

In Arkell's Endings , acclaimed endgame expert Keith Arkell guides you through some of his finest games - and grinds. Making good use of clear explanation, not a wealth of variations, he should convince even the most ardent of opening theoreticians and attacking experts that endgames can be enjoyable, as well as beautiful on occasion.

Not only will readers enhance their intuition in the final stages of the game, they will never again write off an endgame as dull or a draw. Along the way, the reader will also learn plenty about the Minority Attack and Arkell's Scale of Pawns, which may mean you will no longer look favourably on trading an e-pawn for a d-pawn.

As becomes clear in Simon Williams' Afterword, there is so much more to Keith Arkell's chess prowess than just his endgame mastery. Throughout, his creativity and sheer resourcefulness shine through, with the Ginger GM demonstrating that one should never allow Arkell to advance his g-pawn as Black, or even to attack.

Grandmaster Keith Arkell has been one of Britain's most prolific players since turning professional in 1980. His rivalry on the weekend circuit with fellow GM Mark Hebden is the stuff of legend, but he has also thrived on the bigger stage. He has finished first as many as 25 times at the Paignton International Congress and in 2008 tied for first in the British Championship at Liverpool's iconic St George's Hall. 2014 was another highly successful year, as Arkell became the European Over-50 Champion, following that up with the silver medal at the World Senior Championships.