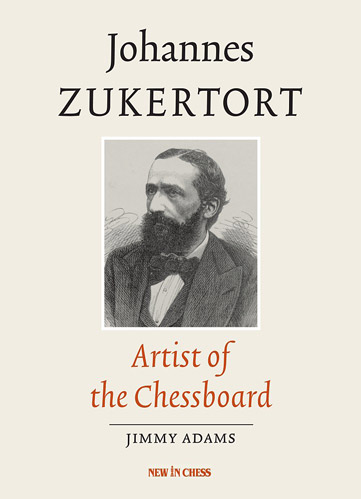 As one of the contestants in the first official World Championship match in 1886, Johannes Hermann Zukertort (1842-1888), is undeniably one of the great players of chess history. Despite a commanding lead in the early stages of that match, Zukertort ultimately had to bow for Steinitz, plagued by health problems that would cause his untimely death only two years later. The high-point of Zukertort’s career was his triumph at the 1883 ‘super-tournament’ in London.

His dazzling win against Blackburne still stands as one of the greatest games of all time. Acclaimed chess author Jimmy Adams presents a selection of Zukertort’s best games, mainly annotated by Zukertort himself, and a collection of insightful articles on Zukertort from contemporary sources. In this monumental book, originally published in 1989 in a limited edition and highly sought after by chess collectors, Jimmy Adams brings Zukertort’s masterpieces to the notice of today’s chess world and secures his rightful place in history as an important link between the old combinational and the modern positional school.

Jimmy Adams is a prolific chess author, who has written, translated and compiled a wide range of books on openings, historical tournaments and legendary players. From 1991 to 2010 he was the editor of the English magazine Chess. British Chess Magazine: “Such comments as ‘a labour of love’ and 'a tour de force' come to mind when perusing this large book.” Edward Winter, Chess Notes: “Another fine achievement.”