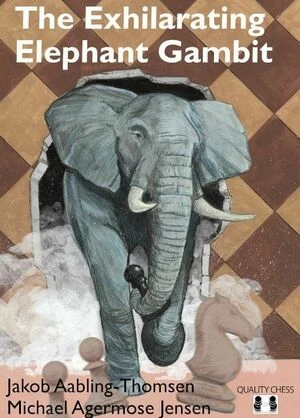 The Elephant Gambit is perhaps the boldest opening in all of chess theory. By meeting 1.e4 e5 2.Nf3 with 2...d5!?, Black takes the fight to his opponent and aims to seize the initiative as early as possible.

The Exhilarating Elephant Gambit offers a complete repertoire for Black, based on 3.exd5 Bd6 or 3.Nxe5 Bd6 4.d4 dxe4. In return for the sacrificed pawn, Black ensures himself of quick and active development with most of his pieces pointing menacingly towards the enemy kingside. Attacking and other tactical resources abound, with a future ...e4-e3 advance often mauling White’s position like an Elephant’s tusk. With original analysis of all variations and improvements against all published “refutations”, this book contains everything you need to shock, surprise and stampede your opponents.

Jakob Aabling-Thomsen is a Danish international master and Elephant expert who is known for his attacking and uncompromising playing style.

Michael Agermose Jensen is an experienced tournament competitor who has been playing and studying the Elephant Gambit since 1997. He is the author of numerous physics and mathematics books. This is his first chess book.